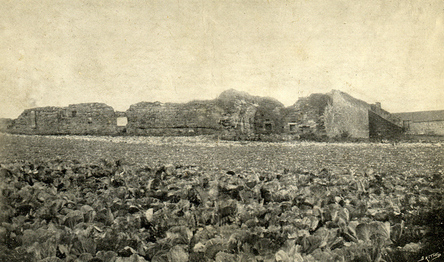 Cousland Castle, likely to have been built in the reign of William the Lion 1165-1214AD. Under the old ecclesiastical regime, Cousland was the seat of a Chapelry. This Chapelry had previously belonged to the Abbey of Dunfermline and was annexed to the Parish of Cranston around the reformation. It seemed to be dependent on the church of lnveresk.

A simple Peel Tower of great strength, it probably resembled Elphinstone Tower though smaller and they would have communicated with each other by beacon lights. It was in existence when the Barony came into possession of the House of St. Clair in 1215AD when the St. Clairs used it as a hunting lodge.

The Big Cousland Dig in 2008 employed the services of a professional expert in Scottish history, whose research
has helped us establish the importance of Cousland Castle or Nunnery and it's owners, in Scotland's Story.


﻿Timeline of notable owners of the lands of Cousland ﻿

William St. Clair was the Fourth Baron of Roslin; Third Baron of Pentland; and the First Baron Cousland, inherited in 1180, died 1214.

There is mention of Cousland in a charter of William The Lion around the late 12th century, that may relate to the lands, being in some way connected with the Abbey of Dunfermline.

In 1494 Cousland passes to the Ruthvens – William 1st Lord Ruthven d.1528(his mother was a Cranstoun of that ilk which explains a connection to the area. His eldest son died at the Battle of Flodden in 1513 )
Note: The castle that now stands could indeed have been built at this point, as the style does indicate a late 15th century origin, and would
correlate well with a new lord of the lands of Cousland. Interestingly in 1509 there is mention of a dedication of a chapel at Cousland to
St. Catherine by William Lord Ruthven and his wife, Isobel Livingston.

“On the evening of 9 March 1566 Ruthven made a dramatic appearance in the queen’s chamber in Holyrood House while Mary was at supper with her friends.Ash-white from his illness, visibly wearing full armour under his nightgown, he demanded, ‘Let it please your majesty that yonder man David come forth of your privy chamber where he hath been overlong’ (Fraser, 252), before giving a barely
coherent recitation of the secretary’s misdeeds. His accomplices then dragged Riccio out of the room and stabbed him to death, after which Ruthven returned to the queen’s presence and asked for wine.

Ruthven remained on guard with his men at the palace for two days, assuring the queen’s attendants and the burgesses of Edinburgh that no harm was intended to the queen. Furthermore, he reassured those who questioned what was
happening by telling them that he was acting at the insistence of Lord Darnley. Mary soon escaped, however, and regained the upper hand, and Darnley equally quickly denied any part in or knowledge of the affair. Consequently Ruthven and
his accomplices were forced to flee to England, after which they were tried in absentia and subjected to forfeiture for treason and non-compearance.

Some of Ruthven’s force guarding the palace came from Cousland and there are records of at least two of his tenants being there.
April 6th 1566 John Hunter in Cowsland and John Smith elder in Cowsland  (among others from Dalkeith, Musselburgh etc) found surety to underlie the Law for the treasonable watching ,warding and imprisoning of our sovereign lady in her Palace of Holyrood.

Patrick Lord Ruthven flees to England where he writes his account of the Riccio murder and dies 16th May 1566. William his son was also involved in the murder and also fled to England.

William 4th Lord Ruthven later 1st Earl of Gowrie. born ca.1543 succ. 1566. is executed 4th May 1584 for his part in the Ruthven Raid kidnap of
James VI 1567- Mary surrenders to the confederate lords at Carberry Hill.
The army of the lords halts at Cousland for about eight hours. William is one of the confederate lords.

15 June 1567 “the lords made great haste until they came to the Magdalen brig at Musselburgh and there the two armies being in each others sight strove continually from five o clock in the morning till noon against each other to have the advantage and pre-eminence of the sun and there after the lords strove so for the sun that they passed to Cousland, and the Queen’s grace and her army
remained on the height at Carberry where they stayed til eight hours at night”

1584 – The execution of Gowrie, forfeiture of Cousland and other lands to Earl of Arran.Though Gowrie is intially pardoned after he falls from power, his enemies soon move against him. He’s accused of witchcraft, treason and conferring
with a sorcerer, found guilty of treason, Gowrie was executed at Stirling on 4 May 1584 and all his lands were forfeited.

Cousland is forfeited, and gifted by the Crown to Sir Hugh Herries for his part in rescuing the King from the supposed assassination attempt but the lands are still in the hands of Dorothea Stewart the widowed countess, so he is given a pension from Scone until he can possess the lands fully.

Sir George Hay was an influential and powerful man and also an early industrialist with patents for iron manufacture and glass manufacture, he was also the Lord Chancellor of Scotland (1622)
When Cousland was under his ownership they have a witch-hunt in the year 1630!


And perhaps it is here that we can see the origins of a new life for Cousland,
with the construction of a model village, blacksmith, windmill, pottery and Walled garden.