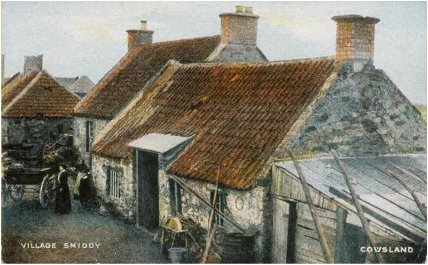 It is not known exactly when the original Smiddy was built in Cousland. The earliest historical record of smiths working in Cousland dates from 1740, but it is probably much older. It is believed the building, here today, dates from 1703.

The real interest of Cousland Smiddy lies in the complete industrial 'story' of its buildings and collections - evidence of continuous activity and adaptation to market forces, through the last 300 years.

Nowhere else in Scotland is there a working blacksmith's shop interpreted to the public.

The historical importance of the smiddy to the rural economy of the local area cannot be in doubt. Its prosperity is based on agriculture and coal mining. Agricultural improvements which began with the enclosure of the land in the eighteenth century led to increased use of horse-drawn machinery that needed to be repaired locally. As roads were improved, their surfaces were hardened and working horses needed to be shod. All these improvements generated work for the blacksmith who already had a valued place in the community, making things like pots, pothooks, door bolts and hinges. Up to the 1940s, the smiddy was the hub of the village; a social centre for the men who gathered there for a chat and a smoke.

The Smiddy is a treasure trove of old tools and agricultural and metal working artefacts. A foot driven grinding stone and a huge cast iron disc, used in fitting metal tyres (girds) to wooden cart wheels, can be seen in front of the Smiddy.

The present cottage, clearly incorporating an earlier structure, dates from about 1820. Various phases of modernisation took place up to the mid-1960s. A major restoration project started in 2003 to refurbish the cottage to create the facility we see today.

The bricks used in the chimneys of the cottage were from the local Smeaton brickworks, mentioned in the statistical account of 1790.

The but ‘n’ ben is probably 17th century and possibly shows the size and style of the original smiddy and smith’s cottage.

The workshop to the east of the smiddy was built at the start of World War 2 (in early 1940) to help with the upkeep of the many machines needed in the local coal mines. 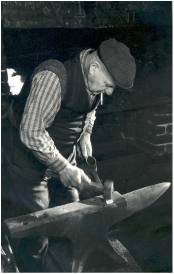 In the 1841 census there is mention of a blacksmith called John Neil, the second last of possibly five generations of the same family who had been blacksmiths in Cousland since 1724. The Neils left Cousland for Edinburgh in 1874.

The 1882 valuation rolls make reference to a William Sked as proprietor of the Smiddy. We know that the business was handed over to his son Christopher Sked in 1890, then passed down to the third generation, in the early 1920's. In turn it was handed over to Kit Sked, who worked at the Smiddy until 1989.

A young farrier, Mark Russell, worked at Cousland for short period in 1989. Followed by Jamie Fleming until May 2015

Sean Cockburn takes over as blacksmith on 1st July 2015.

The Smiddy was threatened with closure in 1986, when the then blacksmith Kit Sked (well into his 70s), announced his retirement. The Cousland Smiddy Working Group, later to become Cousland Smiddy Trust, was formed believing that Cousland Smiddy could become a superb local heritage and educational facility.

Currently we are working on Phase 3 of our long-term ambitions for the smiddy complex.

Phase 1 involved the Smiddy, the workshop and the grounds; making them safe and suitable for a working blacksmith and benefiting local villagers and visitors.

Phase 2 concentrated on the Smiddy cottage; making an exhibition space, a meeting room for small community groups and an office for the Trust.

Phase 3 now allows villagers and visitors to access the large collections of documents, maps, photos and artefacts relating to Cousland's colourful and interesting history in the Heritage Hub in the cottage. The collections are ever growing as we find fascinating stories reaching back over 4,000 years in Cousland.